Creating Space — For Everyone!

All ages! All abilities! All sizes! All genders! All faiths! All expressions! All arts! All cultures! All welcome!

Such is the rallying cry of Creating Space, a grass-roots community arts studio which opened this past December in downtown Nogojiwanong/Peterborough, Ontario, welcoming all who venture inside and bringing new possibilities to the city’s art scene.

“Art can be anything where you are creating”.

It describes itself as a  studio that fosters community resilience by making art, telling stories, and learning together. And it’s more than just visual art, because, as artist and founder Deb Reynolds says, “art can be anything where you are creating”.

Along with art exhibits, you’ll find belly dancing, drumming circles, board games, photography, repair cafes, and even a gender-independent kids’ drop-in where kids and parents can connect with other families in a supportive and affirming space. It’s also part of a downtown First Friday Art Crawl every month.

Materials are provided and are free. Art making is self-directed, but sometimes there may be an activity led by a facilitator.

“It’s a source of social connection for people, taking down barriers of isolation and loneliness,” said Reynolds. 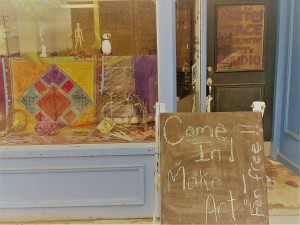 “One of the purposes of this studio is that art and art-making is for anybody. We live in a capitalist society and that means the commodification of art often makes it inaccessible. But the principle of accessibility here is central.”

Creating Space saw about 150 people come through its doors in March, and for many of those people, it was like a dream come true.

“It’s every artist’s dream to be able to to walk into a studio and they say to you ‘you can use whatever you want and it’s free’,” said Tori Windrem, 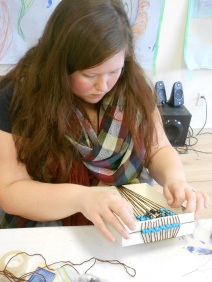 who has been coming since it opened and trying out new projects with the free materials. She’s creates “in everything from writing to music, arts and crafts”.

“It can be expensive to be an artist, and sometimes it can be a solitary venture, but this space gets you out of your home, interacting and talking with others.”

For Luke Boudreau and his mother, Holly, Creating Space is “beautiful, welcoming, caring, amazing, quiet and safe”. Luke has anxiety related to violence, and his mother has disabilities. Their brother and son died last year.

Holly says she walked past the studio a number of times before stepping inside. She’s a folk artist using paints, fabrics, and mixed media.

“Coming here has really helped me to be social in a safe place. A disability income doesn’t allow for ‘extras’, so coming here and having free art supplies is a true blessing,” she said.

“Being able to be creative without worrying about the costs and being safe is really important. When you walk through the door, no matter what kind of day you’re having, you always feel better,” Holly said.

The studio is one of 130 Art Hives world-wide dedicated to inclusion, respect, learning and building community in a creative environment that embraces differing socio-economic backgrounds, ages, cultures and abilities.

And it was the concept of “art hives” that led to the existence of Creating Space, said Reynolds.

About five years ago, when she was involved with Jumblies Theatre in Toronto, “the idea of community arts came alive for me. I realised it was a dream of mine that had existed for a long time. There was a vibration that felt like ‘this is what I want to do’.” 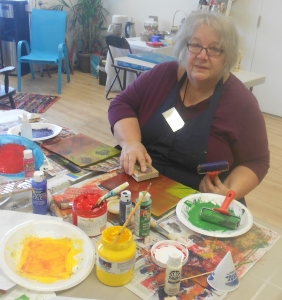 She has been working on making Creating Space a reality for three to four years, starting with art pop-ups in different spots in the city and partnering with organizations like Seeds of Change and Peterborough Dialogues to offer art-making.

Call-Out to Community for Space

Creating Space needs a place to call home. Reynolds said it is doing the best it can, but would appreciate more community support.

It opened in December but will need to vacate the studio at the end of April when the rented space will be taken over by another occupant — SUP (Stand Up Paddle)  — for the summer. Reynolds points out that Kelly Zak, owner of SUP, has been very supportive and gave the space a reduced rent. The studio is funded entirely through donations, with volunteer staff, but has recently received its not-for-profit status and hopes to get some grant funding to enable it to return in the fall to the same location. It has an Arts Week grant for activities in September.

Reynolds would love to be able to have lots of workshops, as well as hosting an art space, she said, and to be able to pay facilitators. She said Creating Space is a not-for-profit organization with insurance and there are many empty stores downtown that could serve its purpose well.

“It’s really sad that this place isn’t going to be here in the summer,” said Luke. “It’s just such a positive community outlet, a social as well as a creative spot and it’s going to be missed by a lot of people who are isolated. There’s not a lot of social events for people who are perhaps a little withdrawn and not capable of a normal social life, so I’ll miss it greatly.”

“If anywhere can create a place to belong, this is it.”

“It’s just starting to become known, and now we have to leave,” continued Holly. “That is really a shame. It makes me so sad that a city like Peterborough isn’t more supportive of a place like this for all its citizens.”

Reynolds said it is sad that no one from Downtown Business Improvement Area (DBIA) has come to the studio, even though they have been invited multiple times.”I understand if we don’t hold the same value, and yet there was the DBIA’s Downtown Belonging Project last fall. If anywhere can create a place to belong, this is it.” 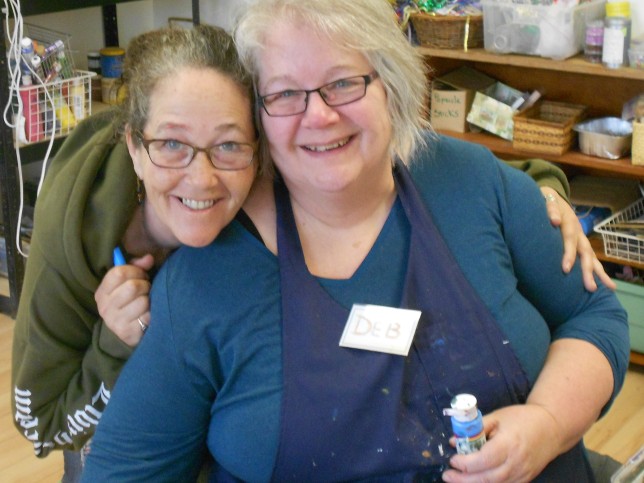 A Clown at Heart

Reynolds dabbles in fibre art, felt-making and print-making, but for the last 10 years the theatre clown art form has been her passion.

From AlleyWaltz 2013, MiraBella (Deb Reynolds) ponders,”What does it mean to be beautiful?”

She trained with John Turner, who is part of the Canadian clown “Mump and Smoot” duo, and learned an interactive, improvisational method aimed at adult audiences. She has performed numerous times with Peterborough’s Public Energy;  taught workshops; and performed in Toronto at conferences and other venues.

“There are no limits to people’s ideas and the possibilities you can dream up together.”

“You go on a journey together. At the end, you go your separate ways, but hopefully there’s been an impact from the audience to the clown and vise-versa.”

Originally from Newfoundland, Reynolds moved with her family to Pasadena, California, when she was seven  — “a big shock to the system”.

Then she lived Toronto for Grades 4 to 13, and then attended Guelph University. She spent two and a half years in England, came home and worked as a group home counsellor, and then got her teaching certificate. After two years teaching in Trenton, Ontario, she ended up in Enniskillen and stayed for 23 years, teaching special education and Grade 2 to 5, commuting from her home in Oshawa and then Bethany. She moved to Peterborough 11 years ago.

The onset of Chronic Fatigue Syndrome led to early retirement, and since then she has been “healing, making art with people and looking for the right fit.”

So who comes to Creating Space?

“People who walk by, moms with their kids, and some people are referred by social agencies,” Reynolds explained. 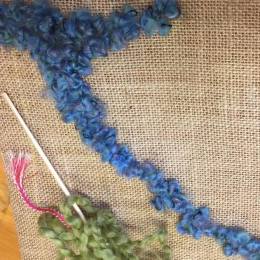 “There are lots of people who don’t have time to commit to six-week art classes, but they can pop into Creating Space for a couple of hours on a Friday morning. They are getting that spark fed.”

As an introvert, Reynolds loves the energy that comes when people come together. They bounce ideas off each other and something grows that couldn’t have happened with just one person, she said.

“There are no limits to people’s ideas and the possibilities you can dream up together. I get a lot of inspiration from that.”

“It’s hard to create those community connections (when new to a city), so Creating Space is also for me, as much as for the community,” said Reynolds.

Check out these coming events at Creating Space:

NOTE: Creating Space has secured a new home in Peterborough for the summer months. It is located on Stewart Street, behind the John Howard Society (which is on Stewart Street), but the entrance is off Charlotte Street, right across from the Publican House Brewery between Reid and Stewart Streets.

The new space will open Tuesday, May 22. Come visit, come make art. 1:30 to 5:30 p.m. Stand on the north side of Charlotte Street at the Publican House Brewery. Look across the street and you’ll see the rainbow fish welcoming you!! Parking is on neighbouring side streets, or use a meter on Charlotte. There is also a paid parking lot on Rubidge.