Keara Lightning: “Indigenous scholar, activist, environmentalist, community builder, skilled writer, quiet leader, and an inclusive teacher with deep convictions and a passion for the many initiatives she takes on and supports.” 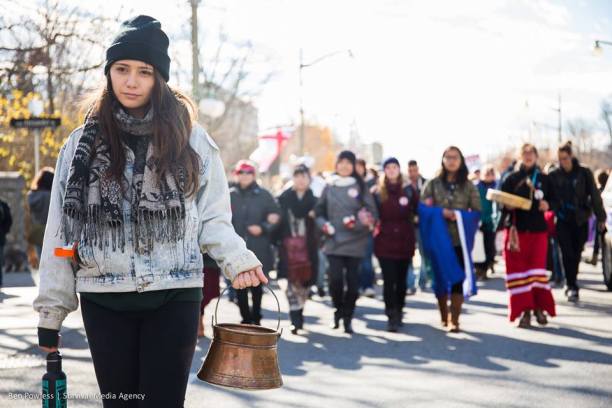 Those are just some of the words used to describe Keara, 21, by her nominators  — her colleagues at TRACKS (TRent Aboriginal Cultural Knowledge and Science Initiative) at Trent University in Nogojiwanong/Peterborough —  for Red Pashmina Inc.’s  Jessica Melnik Young Women of Impact Award.

Keara Lightning is one of three young women in Nogojiwanong/Peterborough, Ontario, who recently received the award (see below) from Red Pashmina Inc., a local non-profit organization which raises funds for the education of women and children in Afghanistan and, at home in Canada, recognises the community efforts of women.

“My activism has taught me a lot. It’s always shifting and going into different forms,” said Keara, in a recent interview with JOURNEY Magazine. “I’m always thinking of how best I can be of use to the world and also how best I can be happy — those two things.”

“My voice came out stronger than I thought it could. I didn’t know I could speak like that. It was like it came out from somewhere else and I just kept doing it.”

A Nehiyaw person with family on the Samson Cree First Nation reserve in Maskwacis, Alberta, she is now studying in Trent University’s Indigenous Environmental Studies program.

After growing up in Orangeville, Ontario, north of Toronto, she headed to the University of Toronto after secondary school, and lasted one year, before moving on to Trent U.

“I had a hard first semester (at University of Toronto), so I decided to volunteer for, like, everything. Through that I discovered what I like doing and my main interest became the fossil fuel divestment campaign,” she said.

“Coming from a small town and then going to Toronto was like the world just opened up for me,” she continued. “My voice came out stronger than I thought it could. I didn’t know I could speak like that. It was like it came out from somewhere else and I just kept doing it.”

She went to New York with the People’s Climate March in 2014 and then got a summer fellowship job with 350.org  two summers ago. The following summer she travelled to northern British Columbia to volunteer at the Unis’tot’en Camp, a Wet/suwet/en land-defense camp, which has been protecting its land from a pipeline for a number of years.

Keara said she felt Trent U., more than a  big-city university, offered more community connections and chances to actually work with people on the land.

With Trent’s TRACKS’ program, Keara provides ongoing insight into program improvement and works “to educate educators”, helping them respectfully include Indigenous perspectives and decolonial practices into their work.

In the spring of 2016, she began facilitating workshops in Nogojiwanong/Peterborough high school classes, merging science with Indigenous knowledge systems, which she found very rewarding.

An activist and supporter of many causes, Keara also works with Sustainable Trent and Fossil Free Trent. As a Biishkaa leader through First Peoples House of Learning at Trent U., Keara has been a mentor to other Indigenous students. During the past year, she was Vice President of the Trent University Native Association and co-produced a weekly Trent Radio show called Red Nation Station. She has plans to possibly start a zine collective and is also a Cree language learner.

She was heavily involved with Home Fires Burning, a year-long sacred fire in Ottawa for missing and murdered loved ones, and it meant a lot to her, she said.

“It was really powerful to me and had a huge effect on me. I still think about Sue (Martin) and some of the people who brought me there from a march. I went back and took people from Peterborough.”

“The most important people to me now are the people I either brought there or met there.  It was an interesting contrast to a lot of activist work in large organizations. She (Sue Martin) did it on her own. She felt she was called to do it, even though part of her didn’t want to, and everything else fell into place. She kept it going for over a full year, and lived in the camp through the winter.”

Here in Nogojiwanong, Keara started a #NODAPL reading group last fall. She put together an extensive syllabus of work by academic activists and allies about the background treaties and violence experienced by the Standing Rock Sioux Tribe in North Dakota.

“I was kind of thinking of how we can do something that is more long-term than just a march, and bring people together to talk about decolonization. We kept it going for a pretty long time, with a core group of people. That was cool.”

Keara is also a skilled writer and was part of the Words on Fire poetry collective in the city. She left Trent U.  this past semester to visit her family’s First Nation reserve in Alberta, and learned along the way that she prefers more one-on-one activism, rather than large-scale, campaign-focused, structured group activism. She would like to learn practical skills like growing food, she said.

After working this summer at By the Bushel Food Co-Op in Nogojiwanong/Peterborough as its production assistant, and continuing to work with TRACKS when she can, she will return to Trent for her third year of studies — and plans to remain active!

Keara received her award via ‘skype’, as she was in Alberta at the time of Nogojiwanong/Peterborough event.

Red Pashmina Inc. recently celebrated three community-
nominated young women — Keara Lightning, Hanah McFarlane and Sneha Wadhwani – with the presentation of the 2017 Jessica Melnik Young Women of Impact Award. The award honours local women under 30 who embody compassion, tenacity, quiet confidence and the ability to shine their light on those around them while encouraging others to do the same.

Their nominators shared the inspirational impacts of these women within their circles and broader community, and demonstrated the value of bringing together, uplifting and encouraging diverse young change-makers of Nogojiwanong/Peterborough, while at the same time showing their commonalities and potential with women in Afghanistan and around the world.

Many thanks to community members based at Trent Aboriginal Cultural Knowledge & Science (TRACKS), the Community Counselling & Resource Centre (CCRC), and Kawartha World Issues Centre for putting forward and sharing a snapshot of Keara, Hanah & Sneha’s vital stories so eloquently.

A big thank you and recognition is also extended to Kyla Gutsche and family, whose enthusiastic support, ideas and contributions first made this award a reality.

It is hoped that we may all continue to reflect upon and share publicly about the meaningful young women in our lives, and that it will embolden the celebration, connection, encouragement & possibilities of all women, near and far, in their many diversities, challenges and accomplishments!