Hamid Ghassemi-Shall firmly believes that if it wasn’t for Amnesty International (AI) and other human rights’ groups he would be dead.

The Iranian-born Canadian citizen spent five and a half years in Iranian prisons from 2008 to 2013, imprisoned on the charge of spying, but with no evidence against him, beaten, interrogated day and night, isolated in solitary confinement for months on end, and waiting day-to-day to be executed. 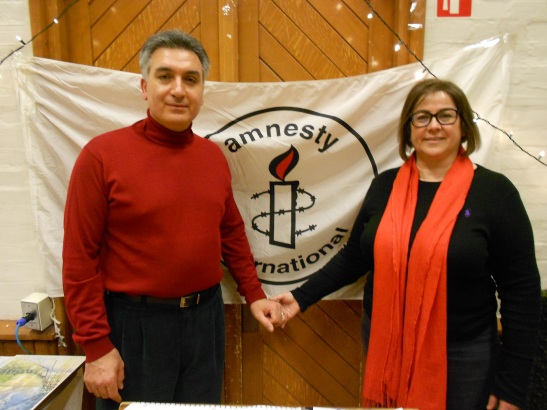 But when his wife, Antonella Mega, in Canada called on AI for help, it was the turning point needed to free him.

“You did it,” Mega told a gathering of about 80 people at the March 5 annual dinner of the Peterborough, Ontario Group 46 of Amnesty International Canada. “Without you we would not be standing here.”

Both she and her husband are now human rights’ advocates, living and working in Toronto, who volunteer to speak on behalf of AI. Hamid also volunteers with several other non-governmental organizations and at the United Nations. He works as a bookkeeper and Antonella is a business analyst and specialist in business systems.

Hamid’s ordeal began innocently.  He had been in Toronto for a number of years after immigrating from Iran, living as “an ordinary citizen” employed as an electronic technician, he told the group, but family members were still in Iran, including his mother, who became ill in 2008. Having travelled back to Iran many times, Hamid left to visit her.

But while there, his older brother, Alborz, a retired Iranian naval officer, was kidnapped and then arrested by Iran’s army intelligence on false charges. When Hamid tried to help him, he, too, was arrested.

It was the beginning of a long and tortuous nightmare. He had no access to the Canadian consulate or his family. He knew his brother was two cells away from him, but there was no contact. After nine months, they saw a lawyer, for 15 minutes each. Nothing improved — they were sent to Iran’s notorious Evin Prison in Tehran for six more months of solitary confinement.

Up until then, they were both expecting to be released at some point, but things took a turn for the worse when they were told their sentences were life imprisonment. By then, they had been transferred to the general prison population which held many political prisoners. In fact, their sentences were death, but the human rights’ lawyer who saw them chose not to tell them that.

Two weeks after they found out the truth, his brother had a panic attack and Hamid was able to have him sent to the prison hospital. But two days after he came back from the hospital, having been assaulted there, he started acting strange, Hamid explained.

“He could only see shadows, and his health started to decline. It took a deep dive. Within a month, he passed away.”

Hamid believes he was fatally drugged while in hospital.

Meanwhile, unknown to Hamid, back in Canada Antonella was fighting her one-woman campaign for her husband’s release. When he finally was told that AI was helping with his case, his spirits soared.

“Imagine that your boat has been wrecked in the middle of the ocean, and you clinging to a piece of wood. and you’re hoping you will see land. That land was AI, when I heard,” he said. 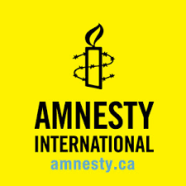 The Canadian and Italian governments (Antonella is Italian-Canadian) and other human rights’ organizations also stepped forward, and managed to “make a deal”. Hamid said he was finally let go because the Iranian president was going to New York for the United Nations Assembly and wanted to look good. Hamid was one of 80 prisoners released at the time by Iran.

“This says something. It says that with pressure and support we can get a response,” he said.

But before leaving Iran, Hamid made a promise to a fellow prisoner  and friend — Saeed Malekpour, a Canadian permanent resident and Iranian national, who also left Canada to visit an ailing family member. He has been jailed in Iran for the past eight years.  It is alleged a web based program he developed was used to post pornographic images to the internet. Malekpour has denied all knowledge of the program being used for this purpose. His original death sentence has now been commuted to life imprisonment.

During his imprisonment he has been held in solitary confinement and he reports he was tortured into making a false confession. AI has taken up his cause. Hamid asked the Peterborough dinner attendees to please support it also by mailing cards to their Members of Parliament and government officials in Iran.

“It’s not too late. We can do it, and we can do it for him because you did it for me,” said Hamid. “Maybe next year he will be standing here telling his story and advocating for someone else.”

Peterborough’s Amnesty group meets the second Monday of each month at 7 p.m. in the lecture hall at Sadleir House, 751 George St. N. All who are interested are welcome. You do not need to be a member. Its next meeting is Monday, March 13, and members will be writing cards for Nowruz to the families of seven people in Evin prison in Iran.   There are many Amnesty groups that do not meet very often anymore because so much work can be done electronically.  For more information and opportunities to become involved electronically (such as with Saeed Malekpour’s case) see the national Amnesty websiste: www.amnesty.ca .