These are the questions Edward E. George carries with him each day as he travels along the shores of Lake Huron on the ceremonial Nibi Onji Canoe Journey, a significant and arduous month-long undertaking he has decided to do; not for glory, or adventure, or wealth — but simply for the water.

Edward, 23, of Saugeen First Nation, left the base of Lake Huron at Aazhoodena (Stoney Point First Nation) near Grand Bend, north of Sarnia, Ontario on June 17, and is paddling along its east shore to its northern tip, where he will arrive in time for the Great Lakes Gathering July 14 to 17 in Garden River First Nation near Sault Ste. Marie, Ontario. He spends every night on shore, mostly camping.

“Spiritually it is very fulfilling work. Physically it was a bit of a challenge at first, but now it feels natural. I am treating this as a form of ceremony, where the protocols and tasks are being observed,” Edward recently told JOURNEY Magazine through e-mail correspondence during one of his stops.

“As with all ceremony, it is a form of prayer,” he continued. “It is predominantly a way of asking — as they say, petitioning – to be heard. It is abstract to the untrained mind, which is working with various forms of knowing — intuitive and instinctual in the same breath.”

“I wish to get to the Gathering by means of canoe,” he said. “That will be enough for me. The support so far, the prayers going ahead of me, is all a wonderful result of saying ‘I will do it for the water’, and really doing it!”

“As with all ceremony, it is a form of prayer.”

Edward’s journey has so far taken him up the Lake Huron shoreline, covering 30 to 40 kilometres a day. He will continue up the west shore of the Bruce Peninsula to Tobermory, where he will take the Chi-Cheemaun Ferry across to Manitoulin Island. He will then continue along the Manitoulin Island shoreline, arriving in time for the Gathering.

(First Nations’ community members, Metis and supporters have come together to organize the grassroots Great Lakes Gathering to discuss the many serious issues regarding the health and wellness of the Great Lakes, and what actions can collectively be taken to preserve them. Under the guidance of the Elders’ Council, they will be holding ceremony together for the waters of the Great Lakes and talking about the role of the Anishinaabe Nation to protect the Great Lakes for generations to come.)

Edward is an advocate for a number of different causes, mainly Nishnaabemwin, “our precious language,” he said. He is a youth representative for his community to the Independent First Nations, among many other things.

“The important thing is that I do not shy away from the challenging work ahead of us as Anishnaabek,” he said of his community involvement.

Last summer was his first time to take part in a Sacred Water Walk, inspired by Josephine Mandamin, an Anishabaabekwe grandmother who has traversed over 10,900 miles around each of the Great Lakes, conveying awareness of the precious nature of water.

Edward began last summer’s walk in Sarnia with the plan to go as far as Tobermory, but ended up continuing on to Madeline Island in Wisconsin, U.S.A.

“I became involved because I felt it was my duty to go through both my father’s territory (near Sarnia) and my mother’s (Saugeen Ojibway Nations).”

Josephine adopted Edward as her son, he said, and she has been closely following his canoe trip. She drove from Thunder Bay to see him off.

Edward explained how a vision came to him last November that caused him to embark on his journey:

“When I saw an image of a black figure holding a pail and staff with a little red heart, I saw something incredible. We were paddling along and ahead of us, not too far, we could hear people excited for us, so we started to paddle faster. Then there were people becoming excited behind us, so we turned and there were others joining in from the rear. They were bringing us in. I shared that with some close relatives from the water walk and they said, ‘Wow, it is something that should be done’, and so I decided then, okay, I will do it. I didn’t know how or what or anything but I began planning.”

“I am not a life-long paddler by any standard, besides being what we call a bush kid,” he said. “It takes a lot of common sense to paddle each day in the various conditions, learning and learning and learning. I trained in a few ways — cardio and upper body training and meditations.”

Family and friends have been very supportive in different ways, on shore and in the water, as each day varies and some days are better for paddling than others. He has endured whitecaps, strong currents, tangles of islands, heat and strong north winds.

A major trial occurred on Day Six when he successfully paddled around the huge Bruce Nuclear Power Station which juts out in the lake and creates strong currents.

On June 27, the waves were too big to canoe in the shallow bays, so Edward’s sister, Natasha George, was there to help portage down the highway. Others have provided food (wild rice, berries, maple syrup, bison), shelter, and even paddled for him while he rested. 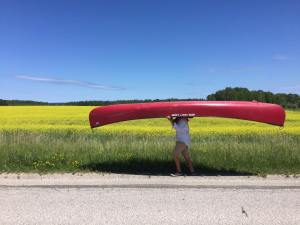 “My supports are the people who show up because they are called to come. Another relative and her partner created the staff I carry with me. The staff itself is my companion most days. When I passed the Bruce Power station my cousin, Daniel, came with me. Water Walkers from last year’s walk are making their way, also. They help in different ways. They pray for me and the water. They carry my gear and food. They paddle with me sometimes. It’s always flexible.”

“Each day is different — there is always something to be learned while on the water. It all depends on the wind direction, the water her self, the sun, the weather in general, my body and mind, what I’m passing by, how much prayer and focus is needed in certain areas.”

“Some days the wind is very strong from the North, and then I am paddling twice as hard to get anywhere. It is arduous, but very worth it. I will travel whenever the water allows. Even at night.”

When asked of the challenges he faces, he replied, “What can I even say?”

“The weather is definitely a challenge most days. One day the water was completely still but the heat was unbearable. I cannot begin to talk about it. Even when I’m not in the water I am thinking of the water, of going back and being there. Emotionally I feel uplifted by the support, by the life I feel coming from the work being done. Mentally, well, to think about it is silly in a way. I could think awhile and become afraid, or worry, or ‘what if this or what if that’. So I just do it.”

Edward is of the Turtle Clan – and he has witnessed many turtles following him. His middle name is Eli and he is called by both. His Nishnaabe name is Waasekom, which means Lightning that Looks Like Daylight. By the end of 10 days, Edward had travelled 250 kilometres.

You can follow Edward and the Nibi Onji Canoe Journey live via Spot at this link: http://share.findmespot.com/shared/faces/viewspots.jsp. Spot updates are every 10 minutes. If it stops blinking for more than 10 minutes, it could mean cloud cover or dead batteries or Edward has turned Spot off because he has touched down. You can also follow the journey on facebook at: canoejourneynibionji